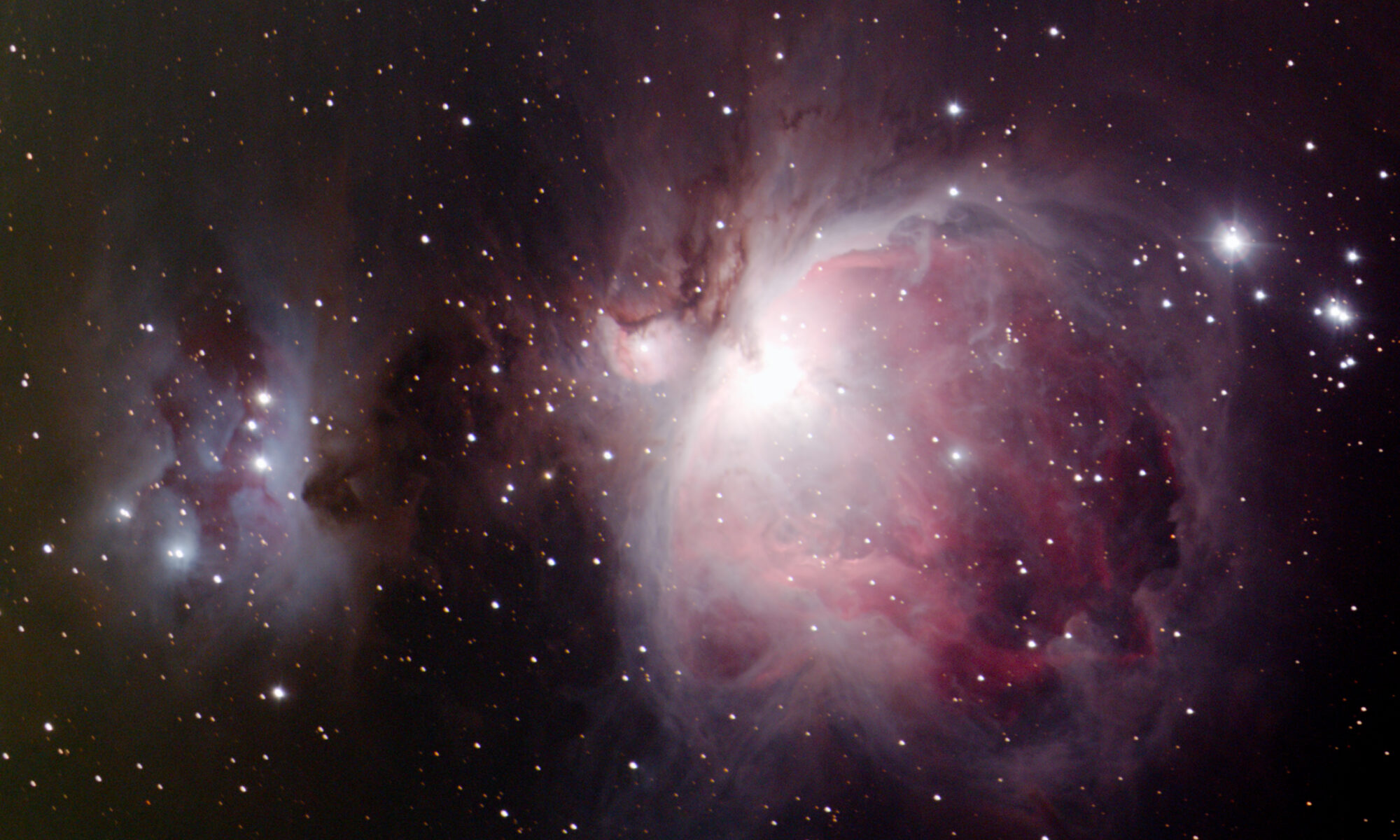 Within recent months I got a really great deal on a Celestron CPC 1100 with Edge HD Optics from a former member of the local astronomy society. This scope is an 11-inch monster and weighs 55lbs mounted in its GPS-enabled fork mount. It’s the kind of scope I would never have purchased for myself new, given the cost.

But as excited as I was for the upgrade and was amazed by the images it could return even from my streetlight-lit front yard, I couldn’t mount my trust Canon EOS RA to the back of it and just start taking pictures. The reasons for this are technical and involve focal length and the need for extender tubes and such, but the primary issue is the fact a fork mount doesn’t rotate with the sky as it follows a target, so the far edges of your framing get shifted out of frame over time. And such a mount doesn’t work with autoguiding software, so the scope won’t stay on an image with the same degree of “stillness” you can get with an equatorial mount.

The fixes for this are both pretty expensive. The first I looked into was getting a “wedge”. This hunk of metal would allow me to attach the scope and fork mount to it on the tripod (would be a lot of heft), effectively turning it into an equatorial mount. But it’s finnicky and I was warned against it by the people I spoke to about it.

The other way seemed so strange and counterintuitive to me and was equally expensive. I could purchase a Starizona HyperStar designed specifically for my telescope and camera. That’s the real limiting factor as it will only work on these two pieces of equipment. I can’t just swap in a new camera or use it on a different scope.

The device itself is a metal tube with lenses that doesn’t attach to the rear of my scope with the focuser but instead swaps into the slot where the secondary mirror lies. It looks strange at first as I’m basically blocking part of my view at the very front of the scope with this tube and then attaching my camera to the back of it and letting a USB cable dangle to the ground, but the effect is negligible on the image the scope returns. Compound this with slotting a metal rod into the scope’s focuser to act as a counterweight and it definitely feels weird.

The HyperStar works by boosting the light gathering being transferred from my scope to my camera. It effectively speeds up the exposure time by a factor of 25x. Now when I take a 10 second exposure with it and my camera, it’s the equivalent to taking a 4 minute and 10 second exposure the old way. An object I would spend hours shooting and risking batteries going dead, alignment issues, random light pollutions, airplanes, etc., I can now do in half an hour with far less of a risk envelop of something ruining one of my images.

I also had to shift to using Astro Photography Tool to control my camera, which required some learning and I’m still figuring out the best configurations of exposure time and ISO settings. But the results have been pretty great so far. I tried capturing the Orion Nebula again, since that’s what I use as my site’s main image. This new image suffers from some light pollution the first one didn’t have, but it also consists of nearly double the images. I captured roughly 100 light frames compared to maybe 30 or 40. Far more detail and nebulosity comes through and it’s exciting to think what the image could look like when redone at a proper dark site.

If you can afford it and have a scope and camera setup that supports it, consider grabbing one. It’s probably the best astrophotography tool I’ve purchased. You get fast, quality exposures. And you have no need for managing an autoguiding camera, software, and mount connections. Let your scope slew to your target and start shooting. That’s it. 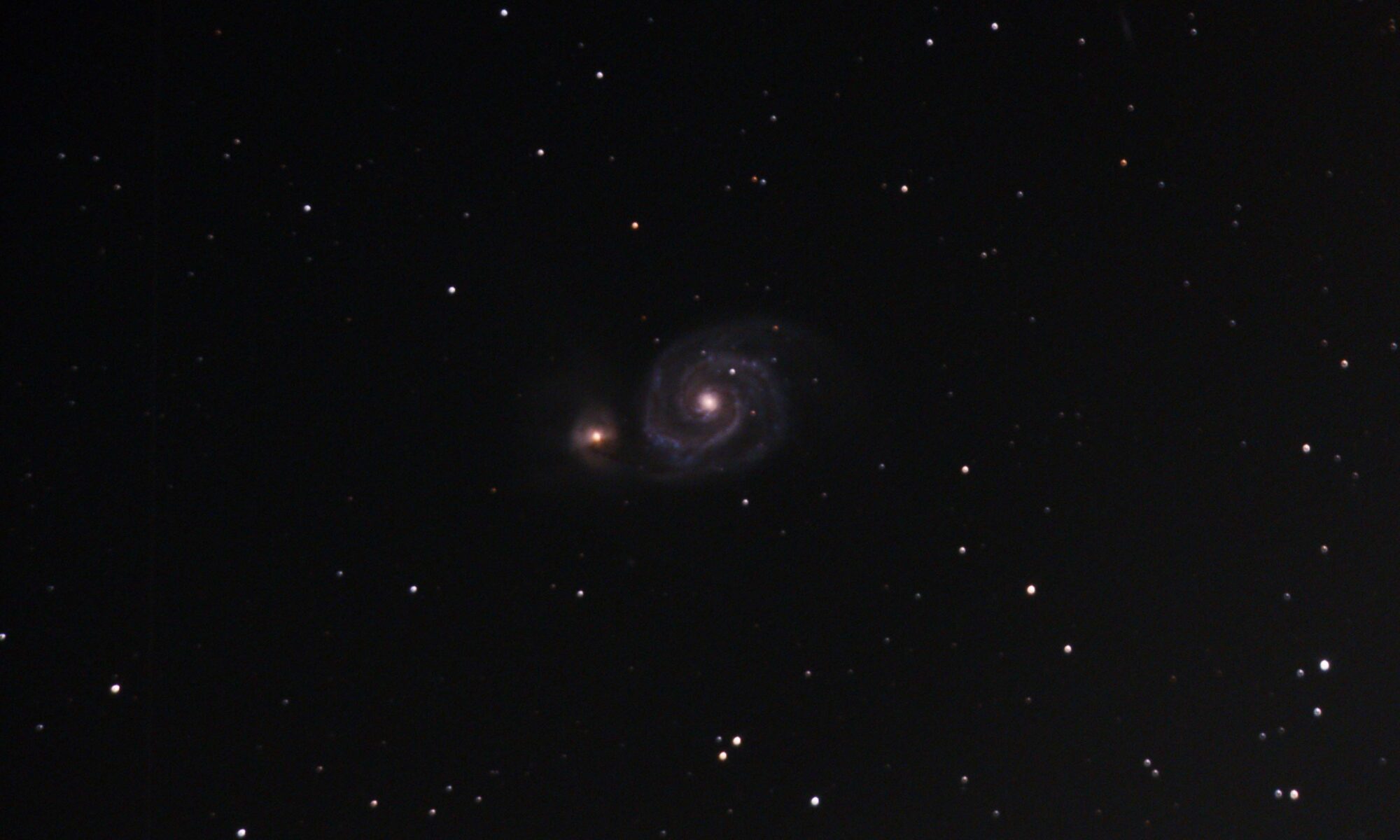 It’s been really hot lately, so I haven’t felt like going out much to do more astrophotography or even any observing. I get enough of the heat during the day from running and gardening. However, I did make a couple of trips out to the dark site when weather conditions were favorable in the spring and earlier in the summer and was able to gather some data for Messier 51, The Whirlpool Galaxy, and Messier 64, The Black Eye Galaxy.

The spring trip to the dark site was the more pleasant one of the two, at least initially. The weather was cooler and conditions were decent and the bugs hadn’t come out in force, but it did get chilly toward the end of the night.

I set up my rig like usual and was determined to take another crack at the Whirlpool Galaxy. I had no problems aligning my rig and getting the focus sharp. The PHD2 was holding the scope on target. I was pretty excited to gather at least 2.5 hours of crisp images of this pair of galaxies.

But as the night progressed, I ran into problems. The first was one of the locals driving by in a pickup truck slowly and with their bright lights. With the angle of my scope, the light broke PHD2’s autoguiding. I noticed it fairly quickly though and was able to stop my camera and redo the autoguiding calibrations.

The next thing to happen was I didn’t notice when the external power supply for my laptop ran out of juice. Once it did, my laptop’s power scheme reverted to “battery mode” and powered down the system after 20 minutes. I caught this a little late, lost some images to streaking, but got everything going again.

The final thing to go wrong came with the dew. The humidity was pretty high and the dew settled hard and fast on the cooler metal of the scope. The lenses and mirrors appeared fine, but my focuser started slipping. I didn’t catch this for quite a while and lost even more data to all several images being completely out of focus.

I got to survey the damage the next morning and realized I lost about half of the data I hoped to gather. But the result wasn’t terrible and was definitely an improvement over my last attempt, even with the minimal amount of processing I did.

My next trip and my only summer trip to the dark site so far was more productive but less pleasant. I arrived earlier than I intended and waited in my car for the sun to set lower because the horseflies were swarming. I could hear them hitting my card like heavy rain drops. They thankfully went away as the temperature dropped and the sky got darker, but the mosquitos came next. The repellant I had was only so effective, so the best I could do was to keep moving and to keep spraying.

Setting up my rig went even smoother than last time and I was up and running pretty quickly. The only issue I ran into was one I should have thought of. My equipment is relatively old and I’m not using a software package that unifies tracking, autoguiding, and imaging, like the Astro Photography Tool (ATP). That’s definitely something I need to learn.

So, as my target for the night, The Black Eye Galaxy, slipped closer to the horizon, my mount went below its meridian and PHD2 either didn’t detect this or wasn’t set up to perform a meridian flip. In layman’s terms, the mount was turned too far to one side and needed to flip around to keep tracking the object.

I did see what was happening and was concerned my camera would eventually hit the tripod. I knew I’d have to stop everything and let the mount re-locate the object to get it to flip. And I did do all this without too many issues. Since I don’t use plating (again, learning ATP would have helped with this), I had to manually reframe the galaxy in my images to be as close as possible to what it was before I made the mount flip around. Of course, I didn’t find out until the next day that many of my images were ruined with the mount becoming unsteady on the object once it went too far past the meridian. I ended up with image after image of streaky, squiggly stars.

But there was some saving grace to this. I learned about the “Drizzle” feature in DeepSky Stacker, which “is a simple algorithm that creates an image that is larger than the images in the stack and interpolates between pixels to ensure it reproduces fine detail in edges despite the effects of stacking transformations.”

One of the astronomy society members that was out there with me told me about it but couldn’t recall what it was called. When I sat down to stack my images, I went through all of the settings in DeepSky Stacker to find whatever this feature was and I’m sorry I hadn’t been using it all along. It’s CPU intensive, but I have CPU power to spare.

Despite losing about half of my data, again, I got a decent result. And I’m almost curious enough to try re-stacking some of my earlier images with Drizzle x3 turned on.

Between my trips to the dark site, I also caught the lunar eclipse that occurred mid-May. Setting up my trusty 8″ Orion Dob in my own backyard with my phone’s camera and no computerized mounts or laptops, while listening to an audiobook, and sipping some bourbon is a lot more relaxing than hanging out on a levee with cows and bugs. If you look closely at this image, you may be able to see the little object heading toward the moon. It might have been a meteorite or a satellite. Whatever it was, it’s not an artifact in the image.