I caught the special Backstage Premiere of The Daily Wire’s first film, Run Hide Fight (2020), tonight and it was totally enjoyable. To be clear, it’s not perfect, but it’s the type of movie I often say never gets made these days. I was sold on it after I saw the trailer and the protagonist’s quip about being remembered. I just thought it was as cool a moment as I had seen in a trailer in a while. You can check it out below.

The concept behind the story of a high school student doing battle with a pack of nihilistic school shooters may leave a bad taste in some people’s mouths and the depiction of the violence, while not at Taratino levels, can be shocking; it’s brutal in its abruptness. The film isn’t a completely original concept, however, just modernized. It hearkens back to older films like Toy Soldiers (1991) and Fortress (1985), but is a little more Die Hard (1988) in execution and plot points. So, if you’d enjoyed those films, you’ll dig this one.

The two main stars really do a great job carrying this film. Eli Brown makes a darkly amusing villain taking on the role of the school shooting plot’s mastermind, Tristan Voy. He manages to be absolutely despicable, while being charismatic and quippy. He’s also pretty terrifying early on in the film, demonstrating only mocking empathy for his victims.

Isabel May reminds me of a young Katee Sackhoff. She juggles playing a scared teenage girl crumbling with grief and a mostly realistic action hero with the protagonist, Zoe Hull. She’s tough and performs a lot of difficult but mostly practical courageous acts as she works through her grief. She’s also not an action hero in the sense she can punch out a teenage boy with 100lbs on her or is an expert marksman that can mow down bad guys. No, she’s mostly focused on getting her classmates out of imminent danger, not having a climatic showdown with her nemesis. The film makes it clear she’s capable but vulnerable, so the audience feels it, and that drives much of the tension throughout the film.

The story as a whole is solid enough. It’s not perfect. There are lots of small little details that could have been adjusted to smooth over some inconsistencies and plot holes. And in a lot of scenes where people should have been running for their lives, they didn’t appears to be in any kind of rush to not get killed. In general, the actors outside of the main cast, extras really, don’t feel especially panicked with a few exceptions, e.g., the cafeteria lady. And without going into spoilers, the film (surprisingly) underestimates how loud gun shots and vehicle crashes can be, especially in closed spaces. The ending is definitely questionable with its execution, despite its parallel to the film’s beginning. It just raises questions you don’t want to be considering when the credits roll and could have been fixed with a few small adjustments. And if we’re being completely honest, the hunting aspect of it is a little cliché but not necessarily in a bad way.

There are some admittedly silly moments. The movie could have done without the school security guard. It’s a bit of quick commentary, but is just a distraction that doesn’t amount to much in the overall story. So, too, is the scene with the Spanish teacher and how (not) well hidden Todd Hull, Zoe’s father, played by Thomas Jane is, during a pivotal scene where stealth would be especially important. A few shrubs would have gone a long way.

Still there are also really clever moments, deliberate and implied. Again, the cafeteria lady’s scene stands out, as does a particular, brief exchange between Tristan and his heavy, Chris, that completely reorients your view of just how manipulative Eli really is. The film also doesn’t shy away from alluding to a particular historical school massacre, which at first seems to be in bad taste, but goes in a surprising direction. If anything the theme it interjects could have been explored a little more to the film’s benefit. The characters also run out of ammo and guns are accounted for through the film, which was refreshing.

One quick fix the film’s producers should make if they do a special release would be to actually pull a George Lucas and digitally enhance some of the explosions, especially the most pivotal one (and maybe add a little more time to that clock if they do).

All of that said, it’s a suspenseful action flick. Some people may be turned off by the film’s producers, The Daily Wire crew, but the film doesn’t dwell on politics or messaging or at least any messaging the vast majority of people would agree with. And what it does reference, it mocks. If anything, it’s the crew’s attempt to decentralize filmmaking a bit, and if they can it’ll benefit movie lovers. This film is pretty much the same as Die Hard as far as any of that goes and people watch that movie for Christmas. That’s not going to stop critics from mercilessly bashing it, both for its assumed politics and for its anti-establishment nature.

The film was free tonight for the premiere but it’ll be behind a paywall tomorrow. However, it would be worth splitting the $12 or so with a few friends to sign up for the Daily Wire to watch it. I’m assuming you could cancel right after if you chose to do so. Given a choice between watching this one again or picking some random new sci-fi or horror movie on Prime or Netflix, I’d watch this again. Hopefully, it’ll be successfully enough for The Daily Wire crew to produce other films or at least encourage the bigger studios to go back to smaller budget flicks like this. 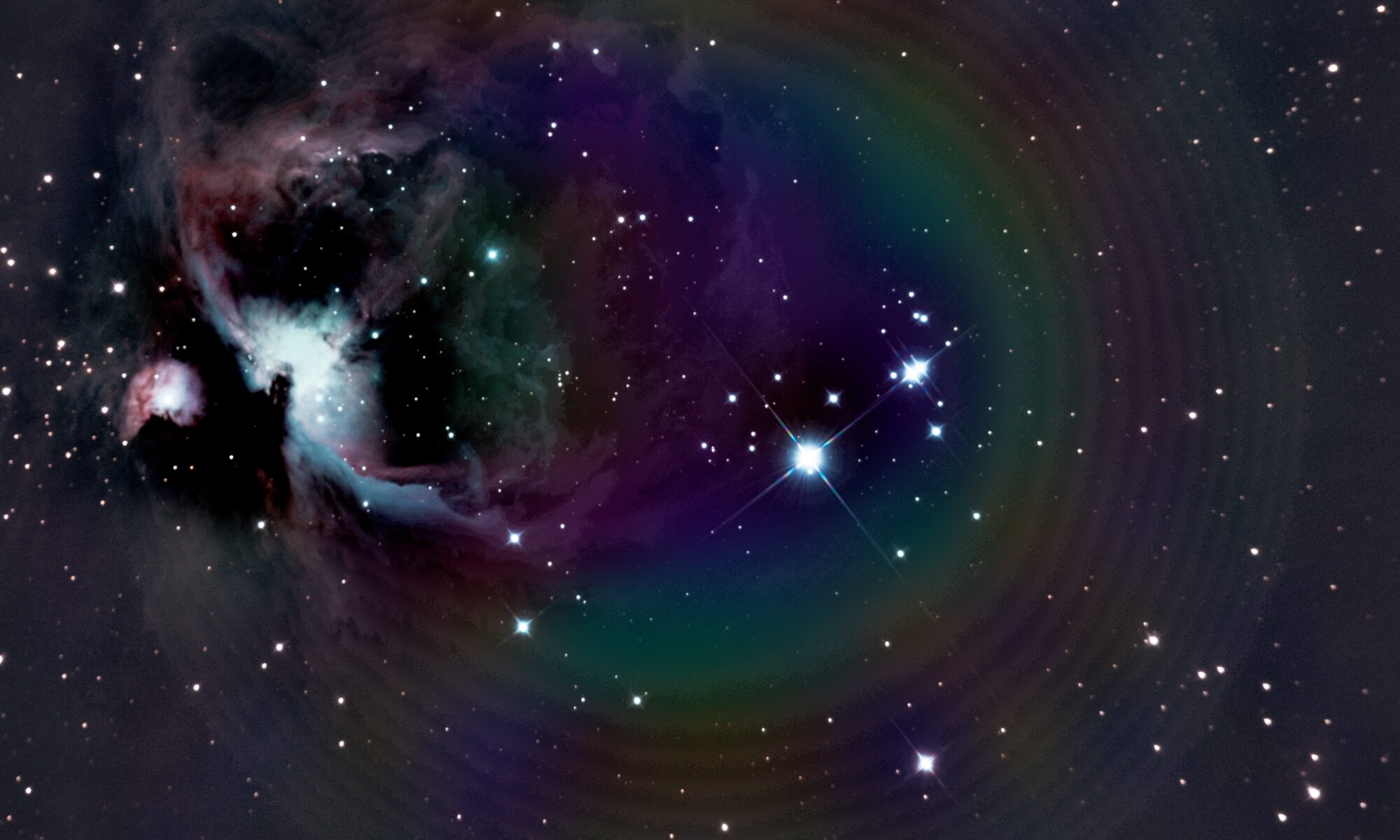 “Vignetting” remains a problem for my astrophotography and has become an even worse since using my new astrophotography camera, a Canon EOS Ra. The pricey camera was a surprise Christmas gift and it works really well, so much so it feels like I just got my learner’s permit and someone handed me the keys to a Lamborghini. But it’s so much more sensitive to light with a larger sensor that it’s almost unusuable in my light polluted sky and backyard.

But what is vigentting? My understanding is inexpert, but I would describe it as the background light in my photographs not being exposed evenly across the frame. So, my corners will be really dark, the middle of my image typically has a brighter rings, and then the middle is the brightest part. This disformity or unevenness in the light gradient makes balancing the background light and stretching the image cleanly almost impossible (at least for me…). As you try to darken the background, especially the brightest parts, you lose the image or you have this blob of overexposed noise.

There are a variety of ways to remove or reduce the vignetting. One tool I attempted to use after hearing it recommended by AstroBackyard was GradientXTerminator. You can download the tool to try for free for 45 days, but past that it costs money. I think it’s a great tool and would be really useful going forward, but I had limited success with my current batch of stacked in images. Here’s what the TIF image above looks like when GradientXTerminator is used on a medium/aggressive setting.

There are also more manual methods that can be performed in Adobe Photoshop that create fuzzy screening layers to even out the background noise or rely on using the radial gradient tool. I didn’t have much luck with either.

Really what I should have done is take some flat frames. These frames are used by stacking software like Deep Sky Stacker to balance out the background light to remove the vignetting. These images should consists of an uneven frame of light, not too bright, across the entire censor so the exposure artifacts and anomalies like dust can be substracted from your final image.

I used to think the flats were just unhelpful and not that necessary. Whenever I did take them, I either didn’t notice a difference or they made the final TIF file worse. But that’s largely because I was taking them incorrectly.

Unless you have a light panel or light box to stick onto the front of your telescope, you’ll be advised to use the “T-Shirt Method”. This method entails stretching a cotton white T-shirt over the end of your telescope and then exposing the end to an even light source like either the dawn sky, a tuned-down all-white LCD screen or light panel, or whatever light source you can at hand that’s both not too bright and also uniform. The T-shirt helps diffuse the light for a more even spread. Once you have the shirt attached and a light source, you snap some frames, like 20 or 30, at the same ISO setting and focus as the frames you took of your deep sky image, but generally with a much shorter exposure. As I understand it, non-technically, you want to return a grayish frame, not an all white one and certain DSLR cameras have an AV mode that will automatically adjust the exposure time for you to achieve this result.

With these flat frame, the frames of your image (light frames), and some dark frames (and potentially some bias frames but I’m not there, yet), you should be able to composite a much more balance TIF file from your stacking program.

That’s all theory to me for the moment, however. My first attempt at flam frames saw me using a rubber band to affix a few coffee filters onto the opening of my smaller refractor telescope and then pointing the scope at a 100-watt-equivalent LED bulb in a shop light. To make matters worse, I still relied on my intervaluemeter to take the snaps and it couldn’t take snaps of less than 1 second of exposure. So, my “flats” were blowing out my image to the point of uselessness.

The next not too cold and humid clear night I get, I’m going to give the flats another shot. I’ve actually bough some brand new T-shirts and figure I can still use the shop light with a lower wattage bulb and possible a second T-shirt over it. I’ll post about how well it goes eventually. Will it work or will I fail? Wait and find out.

In the meantime, here’s an image of my ongoing misadventures in learning to process these images. I guess I inadvertently activated the hidden Sailor Moon plugin.