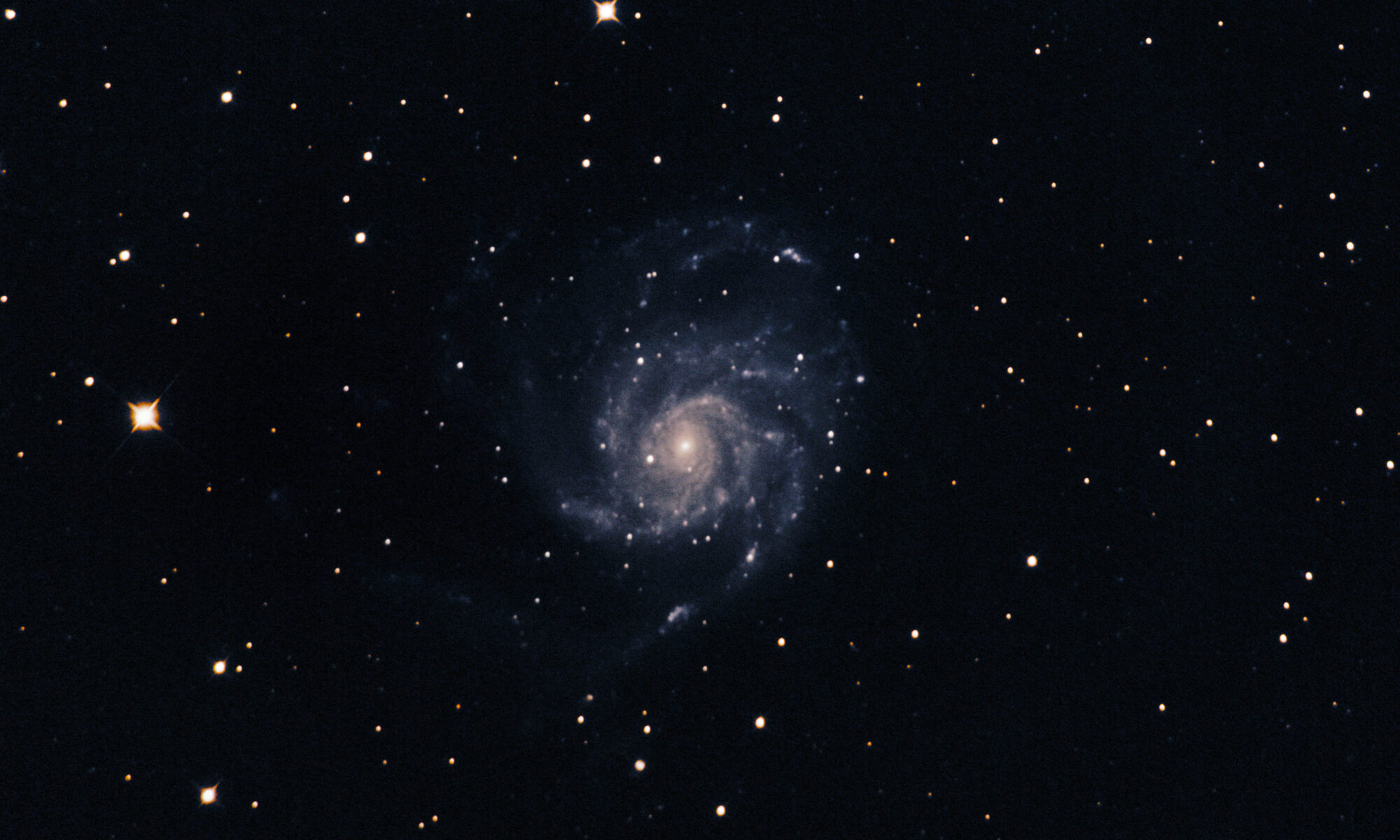 The next target I hoped to shoot was Messier 101, The Pinwheel Galaxy. I made my first attempt from my backyard, relatively early in the night. The Pinwheel Galaxy was low to the northeast and among a fair bit of light pollution. I couldn’t even get it to pop out on my tracking scope using the PHD2 software to live stack multiple, multi-second exposures. It was just too washed out. At a magnitude of 7.86, where the higher the number the dimmer the object is (Orion’s Sword is a 4), capturing this sucker would require a better sky.

I packed in my gear that night, frustrated, but a couple of weeks later with a cold front blowing through, one of the members of my local astronomy society wanted to take a trip out to the society’s dark site. Open to members, I had only been out to the site once before. It’s about 25 miles west-ish from my house and encompasses a levee that sits between a cow pasture and the Atchafalaya Basin.

There are alligators down in the water, roaming cows sometimes, and random locals and sheriff’s deputies going up and down the levee road at odd hours. It’s definitely darker compared to my backyard skies, but there’s sadly plenty of light pollution to the west, a clear indicator of the city’s existence. And more pollution has encroached around the edges as developers drop down new subdivisions.

I’d have visited the site more often on my own, except for a couple of reasons. One is I don’t trust my forward-drive sedan to handle steep dirt, levee roads. If I get stuck out there, I could be stuck a long time, alone. Second, it’s hard to feel safe on your own out there and you really shouldn’t. People, whatever there intentions, come and go through the dark hours of night, and you do need to be aware of the wildlife. Not only are there crocodiles, but you have to be aware of bears, coyotes, and just about every animal that makes the Basin it’s home. It is also within cows to be mean, too.

The third reason would be bugs, which I hear get pretty awful, but I’ve only been out on cold nights. An experience for another time, I suppose.

But how dark does it get? The first time I went, I was a little disappointed. A front had come through so the night was pretty clear, but not perfectly so. I don’t remember if there was moonlight or not. Back then I didn’t realize how much of a problem moonlight could be. So, I could see a lot of stars and some nebulosity of the bright nebulas like Orion and The Pleiades.

This second trip, I got out to the site maybe half an hour before sunset. Traffic was awful on the Interstate and it took longer to travel there than I hoped. A cold front had passed through but the area was dry and on the levee where we do our observing, a constant cold breeze blew ALL night.

The sun slid a little lower as I unloaded my car and started setting up my gear. That’s when things got eerie, but in a logically fascinating way. The sky directly above looked a starless black relative the deeper blues and pinks of the sky around it. And it was as clear as I had ever seen a sky be. Staring up at it was unnerving and gave me this weird sensation of vertigo, like I was going to fall into the sky! I reasoned it must be because I had nothing for my eyes to focus on to give me any sense of depth or perspective. It clearly had nothing to do with Outer Gods and the myriad of other terrors in various stories by H.P. Lovecraft. All of that said, I don’t know if anyone else has ever experienced this before, but it was pretty cool.

Eventually, the other society member arrived and we set up our gear. Both of us had targets in mind for the night, but neither wanted to be out into the early a.m. hours. And when it got dark, it got as dark as I’ve ever seen it as an adult. I could just barely make out the faintest glow of the Milky Way with my naked eyes (and contacts). That’s how dark it got!

I collected a few hours of data (exposures) and spent the night freezing my butt off while I snacked on jerky and mixed nuts. The other issue with setting up at a remote site to do astrophotography is you have to find some way to occupy your time while your camera and laptop do the hard work. I brought a pair of binoculars with me to try to view some other objects, but ultimately relied on conversation and an audio book, “Magelord” by Terry Mancour. It’s book 3 of the Spellmonger Series.

I got glimpses of the exposures being snapped and was thrilled with the clarity I was seeing in the images. I actually shot these at ISO 1600, instead of 800, to try to bring out more detail of the galaxy. I also did 6-minute exposures. Normally, 5 minutes is sufficient, but at the dark site 6 minutes was making things pop.

While the 6-minute exposures worked better than they had any right to with the wind, the higher ISO setting came back to bite me. I didn’t have my trusty porchlight on the levee to use as a light source to take flats and a poor combination of rainy weather and a busy schedule have kept me from being able to set up my gear again, at home, to take those flats. My scope has a ruler on its focusing tube, so I can see precisely which focused I used at the dark site to capture my flats the next time I set up. I did do some quick and flat-less processing of my data as soon as I got home and stopped shivering. I just had to see what I had!

In the meantime, I recycled my most recent flats from my work on the Messier 51, The Whirlpool Galaxy. They aren’t a perfect representation of the flats I would have gotten that night at the dark site, but they should be close enough as far as focus and dirt go. The set up and focus would be the same from my Whirlpool Galaxy imaging. The problem, however, is I took those flats at ISO 800, not ISO 1600. Still, I’ll share the results below.

I plan to reprocess this image from scratch when I can set up again and grab some new flats. I forgot to balance the color before I did the color-preserving star mask. So, the stars are a bit red-shifted thanks to my Eos Ra’s sensitivity to infrared light.

Unfortunately, as the season marches on, I’m going to lose some of my better targets until the fall. So, I’ll have to figure out what to shoot next, when all I really want to do is take another crack at Messier 33, The Triangulum Galaxy and Messier 31, The Andromeda Galaxy, again.