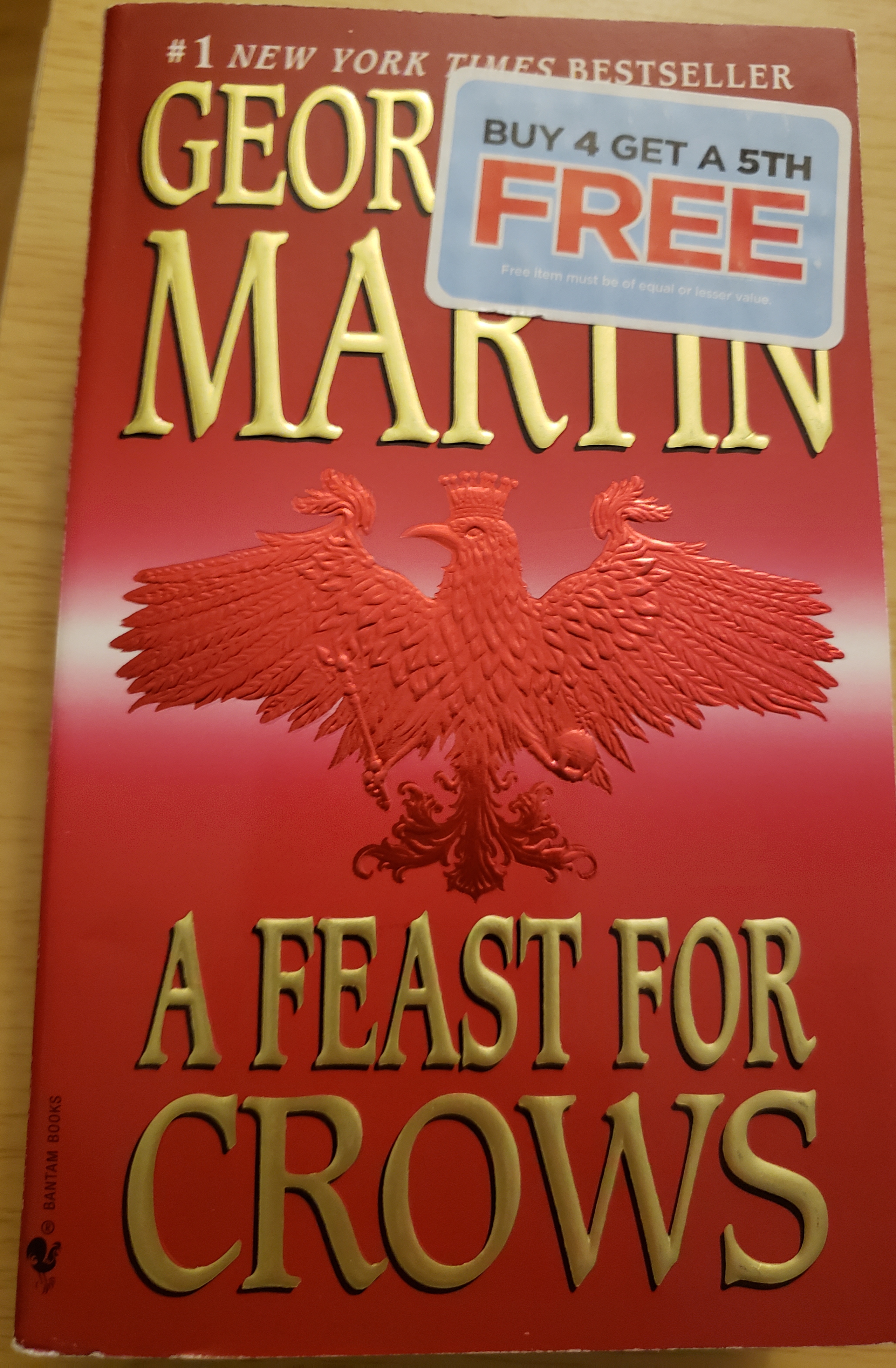 If I’m being completely honest, I gave up on the Song of Ice and Fire back in 2007 after I finished, “A Feast for Crows” and read George R R. Martin’s end note. I knew the series would never be finished at that point. It takes an author to smell another author’s b—shit. Here’s an excerpt of what he wrote and why I checked out. It comes from the 2006 paperback printing of “A Feast for Crows.”

“I did not forget about the other characters. Far from it. I wrote lots about them. Pages and pages and pages. Chapters and more chapters. I was still writing when it dawned on me that the book had become too big to publish in a single volume … and I wasn’t close to finished yet. To tell all of the story that I wanted to tell, I was going to have to cut the book in two.”

But the TV series cane along. In fact, it was the notion that the book series was going to be adapted by HBO that got me interested in reading the series in the first place. You must understand this was in the age of HBO adapting other book series like True Blood. In a way, the premium network was at the forefront of this phenomena long before such series became the flagship for various streaming services.

Even though I checked out on the book series, I watched season 1 of Game of Thrones and tried to get others interested in it. By the end of the season, I lost interest. It was just okay but it was slow like the books and full of the superfluous sex scenes HBO used to market all of its series at the time (see Rome). I let it go and just kept up with news tidbits and YouTube critics’ takes on the various plot developments in the years to come.

I picked up season 8, though, to be part of the conversation and to see how the the showrunners would complete the story without source material. What I didn’t know at the time and didn’t find out until S8:E3 was one of showrunners was responsible for X-Men Origins: Wolverine, which was awful and stupid. It’s the kind of movie that takes what should be a guaranteed payday in the form of Hugh Jackman playing Wolverine and thinks it’s a good idea to first, make a prequel, then sew Ryan Reynold’s Deadpool’s mouth shut, and then tear multiple plot holes in the X-Men cinematic universe. And I know my criticism of this movie panned out at the very least in the case of the actual Deadpool movies starring Ryan Reynolds, which had R rated success.

So, I subscribed to season 8 of GoT on Hulu and watched it. Once things got bad, I was just amused. I heard about the leaks and checked them out. So far, they’ve proven to be accurate. And in any case, this season is a disaster. Character motivations don’t make sense. The hard cuts the script writers keep using so they don’t have to have the characters react to actual huge revelations come off as cheap and forced. The battle tactics are asinine. The physical logic of various climatic scenes is obviously flawed.

Let’s be more specific. Here are some of my favorite gripes.

Arya, while wounded, can move past an army of undead creatures to assassinate a supernatural being, but can’t sneak into and out of a city that’s letting people into and out of it better than Jaime.

The scoprions are able to fire at a deadly, semi-automatic pace and put a cloud of arrows in the air, but when Dany assaults the full Iron Fleet and the city, the bolts come one at a time. Furthermore, you don’t need to kill her dragon to stop her. Several dozen men firing crossbows or longbows at Dany (not the dragon) while she’s torching defenses would eventually land a hit and end the battle.

The war against Cersei should have ended in episode 4 when Dany stood within arrow and scorpion range of the city’s defenses and Cersei didn’t just kill her.

Jon has done nothing in season 8. Yes, there are leaks for the final episode, but let’s be real. Arya killed Jon’s arc in episode 3.

The Dothraki were initially going to charge into the dark at the army of the undead with normal weapons. Normal weapons. Yes, they got fire weapons later and it didn’t matter in the end, but they were prepared to charge without them!

I could keep going. Plenty of people have done some great analysis of these episodes and care more about them than I do. Check out Nerdrotic, Doomcock, or Mauler’s videos on YouTube.

The followup, a.k.a., the other half of a “Feast for Crows”, didn’t come out for another 5 years. Despite my disillusionment, I got “A Dance with Dragons” on my Nook Color. I only read the first few chapters and quit. I don’t care where whores go, Tyrion.

I sold my Nook Color at a garage sale a couple years ago. “The Winds of Winter” still has not come out. It’s effectively been 14 years since the last Song of Ice and Fire book. With that understanding, strap in for the final episode of season 8, because it’s going to get adamantium bullet levels of stupid.

After I saw The Force Awakens, I eagerly wrote a blog about it. My reaction was ambivalent at best. I was irked a bit by the logical inconsistencies in the script and the ill-defined world. But my expectations and excitement for the Last Jedi grew over the following two years. It was going to be the movie that would make up for The Force Awakens shortcomings, deliver on its setups, expand the mysteries, and build some characterization for the new main characters, Rey, Poe, and Finn.

Instead, The Last Jedi killed the franchise for me. It was stunningly awful. It wasn’t merely B movie awful or boring. It transcends awfulness. Each and every scene is a eldritch winding of poor writing that will drive you mad if you trying to untangle it.

I attempted to write a review of it, just as I did The Force Awakens, but I quit when I realized I wrote 2,000 words and hadn’t gotten past the opening scene of the film. It just wasn’t worth the effort because I didn’t care enough about the film to finish the review. It wasn’t worth my words.

Fast forward another year and a half and here we are seeing the teaser for Star Wars Episode IX: Rise of Skywalker.

No, I’m not going to link to it. It’s as bad as the Last Jedi. It exalts the character of Rey who hasn’t actually done anything in two films except fight Kylo Ren to an inconclusive battle and lift some rocks. I still don’t know why she’s even doing what she does or why anyone trusts her or relies on her. I don’t know how she became so proficient in the force or why she is more powerful than anyone else in the saga, save for the plot device/character of Snoke.

The Episode IX teaser opens with Rey flipping backwards over a speeding TIE Fighter, likely Kylo’s craft, and preparing to slice it with her light saber. It’s the centerpiece of this teaser, the first thing we see of this conclusion to the saga, and it’s so dumb for so many reasons:

The scene belongs in a bad anime or video game, not in a Star Wars film. People have been referring to it as “jumping the TIE Fighter,” a snarky reference to the old term of “jumping the shark.” That’s very much on point.

Everything else that follows or fills in between this “scene” is just nostalgia marketing or more mystery boxes. Palpatine can be heard laughing at the end. Big deal. All that means is something will get made up out of nowhere, with no set up, to bring Palpatine back in some form. I guess no one ever caught onto his plotting in the 30 years between Episodes VI and VII.

I don’t care anymore. It doesn’t matter to me who Rey’s parents are or hearing Palpatine laugh. None of these mysteries or hooks have any meaningful payoffs. It’s all just a series of a–pulls at this point in a desperate attempt to salvage absolutely poor planning.

And that’s the worst thing in my mind. This continuation of the saga wasn’t planned out from the beginning. With a multi-billion dollar franchise on the line, they REFUSED to do the necessary work to meticulously plan and script out all three films before they even thought of casting and shooting them. It’s inexcusable.

Lastly, The Last Jedi destroyed the film version of the character of Luke Skywalker, reducing him to a coward and child-killer. It’s insulting to have the title of Episode IX further desecrate the memory of such a well-loved character.