My writing process has it quirks. I’ve become aware of some of these while working with other writers in journalism, technical, and creative fields, so I thought I’d share a few of the things I did and continue to do while writing Divergent Chill: Fall of Night. Maybe you haven’t considered doing some of these things or even realized that they might be abnormal.

I’m rarely able to write on a daily basis. My full-time work generally requires that I sit in front of a computer screen most of the week writing or editing or whatever else I’m asked to do. But it almost always involves sitting at a desk and working on a computer. That burns a guy out, especially as the week progresses, and the last you thing you want to do on a Thursday night is to come home to another computer on another desk and write.

My solution to this seems to be that I’ll do meager bits of writing for weeks at a time until I have a really free night (or day), where I can really turn loose. I’m talking, I need a day where there’s nothing I need to concern myself with for at least eight hours except feeding myself and seeing to my biological needs. When I get such a day, I’ll write 10,000 words easily. At full tilt, I’m generating 2,000 words per hour. When I was trying to finish up Fall of Night, I did the bulk of the writing in one week. The work contains roughly 150,000 words. I wrote about 90,000 of it in a week’s time while recovering from surgery. I was out of work for a few weeks and once I finished my pain pills and got to switch to OTC stuff, I got serious.

It was a great experience in retrospect. I lived and breathed my art for a solid week. And while I sincerely would wish to avoid another complication to my health that sidelines me for weeks, I missed the uninterrupted time I had. And it made me realize what my primary writing habit was.

From the moment I got my first CD player and album on CD (Metallica’s Black Album), I’ve been writing while listening to music. This extends into my professional life as a reporter and technical writer. I jack some ear buds into my desktop, netbook, phone, etc. or use my stereo or desktop speakers when I’m at home and play some tunes. I used to just shuffle whatever I was listening to, but learned over time that some albums or more enjoyable when listened to in their proper order. And I started making playlists with titles that described the writing stage I was in, e.g., Revision List.

What strange about this is I’ve found there are plenty of people, especially from generations before mine, that just can’t write and listen to music at the same time. And there are others that require music that doesn’t contain lyrics. And there are fewer still that require pure silence. Some claim it to be a concentration issue–that the music distracts them–while those writers I see with their earbuds on all the time claim the music helps them focus by blocking out other distractions.

For me, it’s neither. I’m perfectly able to write, even amidst newsroom-level cacophony, but I just enjoy it more with music. It lets me zone out while zoning in, I guess, so I feel what I’m writing more. It also helps me think, by letting me be less conscious of my own thoughts. The music, when it’s grooving, keeps my mind moving forward, even when I’ve hit a stop.

I can’t list everything I listened to while writing the Divergent Chill books, but I’ll list some of the tracks from my Revision List. I linked to those that I can find official videos for. Heed the NSFW warnings.

When I get serious about writing, I do it on my self-built desktop where I have a pair of monitors, an 8-core processor, 16GB of RAM, and a (embarrassingly old) graphics card.

Because, I can multitask like my life depends on it. I can have multiple Word docs open, while researching multiple things with multiple browser tabs, listening to music on my computer or streaming it from Amazon, checking email, etc. and not cause my desktop to slow down. It keeps up with me. I almost never have to wait for it to do anything, even some of the trickier Word-stuff, or when I move among applications. This something I first experienced a computer do (ever) in the early 2000s with Windows XP and an old Athlon XP 2000+ processor. But time and updates gradually slowed the machine down and later off-the-shelf machines and versions of Windows were never quite able to keep up with me until I began building my own computers.

Anyway, I do all of this stuff across a pair of monitors, a mismatched 23″ and 19″ pair of wide, LED flat panels. I cannot espouse enough the joy, pure utility, and efficiency of having a pair of monitors. At it’s most basic level, it allows you to do side-by-side visual comparisons of documents. At a more functional level, I can check something on Wikipedia or make notes in an accompanying Word document without having to minimize the Word document I was working in and then having to find it and select it, again. Or, if you want to copy one section of text from one document into another and want to verify that you’re pasting it into the correct place and copying everything that you’re trying to copy, two monitors is the way to go. This used to be much more burdensome an issue with older versions of Windows, but has gotten better. I still wouldn’t trade any improvements to the task bar for having two monitors, though.

There is also a physical sense to it, to being able to move an application or document to the side so you can focus on what’s in front of you, while knowing the other stuff is just a glance to one side. Once you’ve tried it, even by just hooking a laptop up to an extra monitor, you’re going to find it tiresome to work on a single screen, again, except for the most basic tasks.

I’m certain I have some other writing quirks and if I think about them, I’ll write another blog about it. In the meantime, feel free to share your own writing quirks  by commenting. I need to get to work on my next book!

What I’ve been listening to…

With the ongoing absence of a local modern rock radio station, I’m finding it more and more difficult to discover new music in my preferred genre, so I’ve been working to expand my tastes as a means of musical survival. To that end, I’ve come to rely on a combination of Amazon’s music offerings, Pandora when I have wifi, YouTube/VEVO, and Facebook.

Facebook is where I discovered D’Angelo and the Vanguard‘s album, Black Messiah. A friend and former co-worker praised it after a noisy knitting circle at her cafe of choice drove her to put on some headphones to get some peace.

That’s never really been my music of choice. I don’t dislike it; I’ve just never craved it. So, I was skeptical of the recommendation, but I did some research. I sampled some tracks. I enjoyed what I heard and ordered the CD and received an MP3 version, which I immediately downloaded to my phone. I got the CD in the mail a couple of days later. And yes, the album is a little heavy on politics, but if you can listen to Rage Against the Machine and not be bothered by it, then you won’t mind this one. It also helps that even after listening to the album over a dozen times with earbuds, headphones, computer speakers, and stereo speakers, I can’t understand the majority of the lyrics. Some might consider that a drawback, but it works for me. The emotion and timbre of the vocals fit seamlessly with the other instruments. You may not understand what’s being said, but you can feel it.

“1,000 Deaths” is easily the most serious of the two. It just marches along like a smooth bad ass. And-this is silly-but the track title reminds me of a certain luchador.

“Sugah Daddy” just sounds fun. And I can picture D’Angelo and his band smiling at each other while they perform it. I just kind of hope it’s not really about something terrible, because then I’ll feel like a jerk. Also, it reminds me of Bart’s Nightmare, the limbo dreamworld stage where you try to hop onto the homework papers. Go figure.

So, give either of those two tracks a listen or try some others if you’re curious. There are plenty enough reviews out there for this album, too, if you’d like a more informed opinion.

What I’ve been watching…

I had a mild headache one night not too long ago, so I took a break from copy editing to lie down and watch whatever was on Netflix. This mediocre-rated fantasy movie, Curse of the Dragon Slayer, showed up in my recommendations. There was an elf girl with cool eyes, some orcs, and a dwarf on the cover art. So, I was sold. I’m a fantasy author; this stuff is my bread and butter, usually.

Just a quick note, the movie goes by an alternate title or two. I didn’t know this until I looked it up on IMDB later, but the hyperlink goes to the IMDB page. 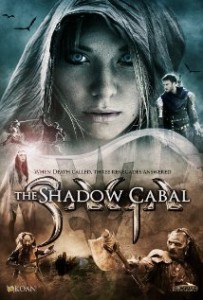 While this movie has a 4.9 rating on IMDB, I wouldn’t describe it as mediocre, boring, or middle of the road. It’s a combination of extremes. It’s sugar and vinegar. And that’s a shame, because I think with just a few script tweaks, tweaks that would have actually saved on the already apparently low budget, it could have been a pretty solid little cult fantasy flick. Heck, they could have worked out a deal with Paizo to make it into a Pathfinder movie (if it were better), by just changing names and such. The old Golem would have been pleased.

Here’s a quick breakdown of the movie’s problems:

Here’s a breakdown of the movie’s strengths:

Get some friends together. Have some beers. Put this movie on. There are plenty of worse ways to spend an evening.

What I’ve been playing…

I picked up the Gamerz Tek 8-Bit Entertainment System. I might have been a little buzzed at the time, but I’ve been wanting to try one of the new retro consoles. I still have a functional NES, but why use it, except for special occasions? Sometimes, I just need to blow off some steam and run through some Ninja Gaiden or Metal Storm. And this little guy, being about the size of 2~3 stacked NES cartridges, let’s me do this with a lot less fuss.

I unpacked it and hooked it up to my HDTV. It was packed pretty neatly. It smelled new and felt sturdier than I feared it would be. I popped in some Ninja Gaiden and slashed through the first few stages. Unfortunately, the controllers it came with became randomly unresponsive. So, I plugged in one of my original NES controllers and it worked fine. I’m debating if it’s worth trying to exchange the system for another one to get some functioning controllers. The controllers for retro consoles like these never get high marks…