Divergent Chill: Battle of Nesma was the Online Book Club’s Book of the Day on Friday! I would have posted about it on my site sooner than this, but I was too busy keeping up with all the tweets, retweets, likes, follows, etc. on my Twitter, @DivergentZen. As of the time of this post, the initial tweet from @TWBookClub about my book being the BotD received 144 retweets and 101 likes from various members in the OBC community and beyond.

I can’t say, really, what effect this has had on sales, as Divergent Chill: Battle of Nesma is offered free on Kindle Unlimited, where I’m compensated for each normalized page read, and overseas sales can take time to process. But, I’m hopeful I’ve intrigued a lot of new readers and possibly picked up some future fans.

It’s also worth noting that people were universally complimentary of the book’s cover, created by David Williams and Jerry Shaffer.

Next up, Bargain Book Reviews is scheduled to review Divergent Chill: Battle of Nesma on July 18. That date may change, however. So, we’ll see.

And I just want to say thanks, again, to Scott Hughes and the Online Book Club community for the support they’ve shown my book for the Book of the Day. Maybe Divergent Chill: Fall of Night will have it’s “day,” too.

And then maybe Divergent Chill Volume 3… 😉

You can read the full review here (and comment in the forum). What follows is an excerpt.

“I rate this book by Brian Fontenot 4 out of 4 stars and would recommend it for mature young adults and up. It is another impressive instalment in the series that takes you straight out of your current environment and smack into the grimy dust of a quest, the sumptuous smells of banquet food and the rough textures of a Ragebourne’s pelt. I am eagerly awaiting the next one in the series.”

You can also check out the reviewer’s (Jacqui Corn-Uys’s) blog here.

Here they are in their final print form! It’s been a long and difficult journey to get to this moment and the accomplishment of it escapes me. There’s definitely a sense of the unreal about seeing my works like this. I’ve told my friends it feels similar to going to see a movie and noticing that parts of it were filmed in your hometown. 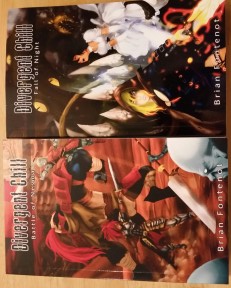 Here’s a pic I snapped of the Fall of Night proof. I needed to make a couple of adjustments and now the files are undergoing the approval process. It shouldn’t be too much longer now. 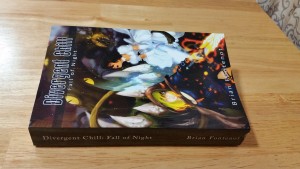