I really enjoyed The Event Horizon. It’s very much a guilty pleasure, I admit. But the set design (amazing in HD), the tone, and the general spookiness (and later, horror) of what occurs in the film all fit together to make something special, something I hadn’t seen in film before.

Well, that’s not entirely true. Before The Event Horizon, there was Disney’s foray into more mature entertainment with it’s (apparently) not well-known 1979 film, The Black Hole.

I’m about to get into spoilers here, but it’s your own fault. One movie came out almost 40 years ago and the other closer to 20.

The basic plot of The Black Hole revolves around a crew of explorer astronauts tearing around space looking for “hospitable life” in their ship, The USS Palomino. And it’s a really is a classic archetypal group of folks. You have the veteran commander, the young hot shot, the chick (she has “esp” and uses it to communicate with the ship’s robot…), the old pragmatist, the idealistic scientist, and a philosophical robot that sounds kind of like Mr. Feeny from Boy Meets World. The intrepid crew detects a navigational anomaly that turns out to be a really massive black hole. More peculiar is the discovery of a once-thought lost American spaceship, The USS Cygnus, holding a stationary position quite near the event horizon. The crew, of course, goes to investigate. Not only did the vessel cost America a ton of money and its construction was pushed by Earth’s resident super genius at the time, Dr. Hans Reinhardt, but the father of the “chick” crew member was designated its commander. So, character motivation!

The crew finds that, shock, Reinhardt is alive and well and that he’s single-handedly invented and employed anti-gravity shields and a quasi-infinite energy reactor, as well as repopulated his ship with robots, one of which is his right (red) hand man, Maximilian. No bullshit, even by today’s standards, old Max is an intimidating robot and is the reason this particular Disney flicked earned its PG rating.

As the plot progresses, holes in Dr. Reinhardt’s story become apparent and the situation spirals into the abyss quite quickly, punctuated with laser battles, a completely random meteor storm, and robot on man homicide. It ends with the crew of the Palomino being doomed to take a trip through the eye of the black hole, following behind the tumbling wreckage of The USS Cygnus.

And much like The Event Horizon, black holes are not just super massive celestial objects that warp space time with immense gravity but are, in fact, portals to the afterlife and beyond. Interstellar got it wrong. Personally, I like to think The Event Horizon ended up in the same place as Dr. Reinhardt and the Cygnus on its maiden voyage. It makes sense, in a way.

It should be obvious that this movie has little to do with science. No, it’s part cash-in, part genius, and part cheese. The soundtrack manages to encapsulate all of these, as well. Try to listen to the main theme if you can find it somewhere. The film also pushed a lot of technical boundaries with its then-cutting edge computer animation and its special effects, especially its computer controlled camera work. There’s a lot of trivia and history about this film. It had a relatively high budget for its time and made plenty back at the box office, but was derided by critics and fans of Disney’s more kid-friendly works.

If you’ve never seen it, try to find a copy somewhere. As far as I can tell, it’s never made its way to blu-ray; I got the DVD. It’s worth one watch for the ending alone. I’m hoping it’ll get a remake, a smarter and more mature script with a consistent tone, and some modern effects, though the Black Hole looks amazing, if inaccurate. Plus, when people ask you which Disney character you’d like to dress up as, you can respond, the murderous satanic robot Maximilian. 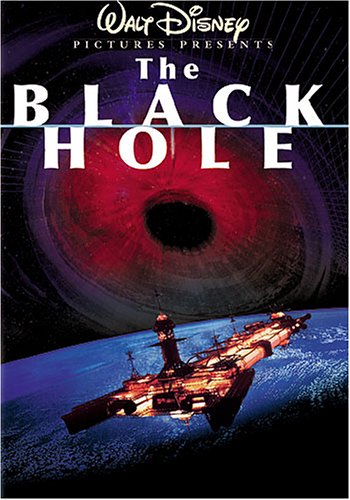 Watching this old flick again after so many years has really given me the itch to work on my own sci-fi book. Writing a serious narrative incorporating black holes, robots, and psychics is a daunting task, but it’s a manageable one. Writing it around football season, however, makes it less so.