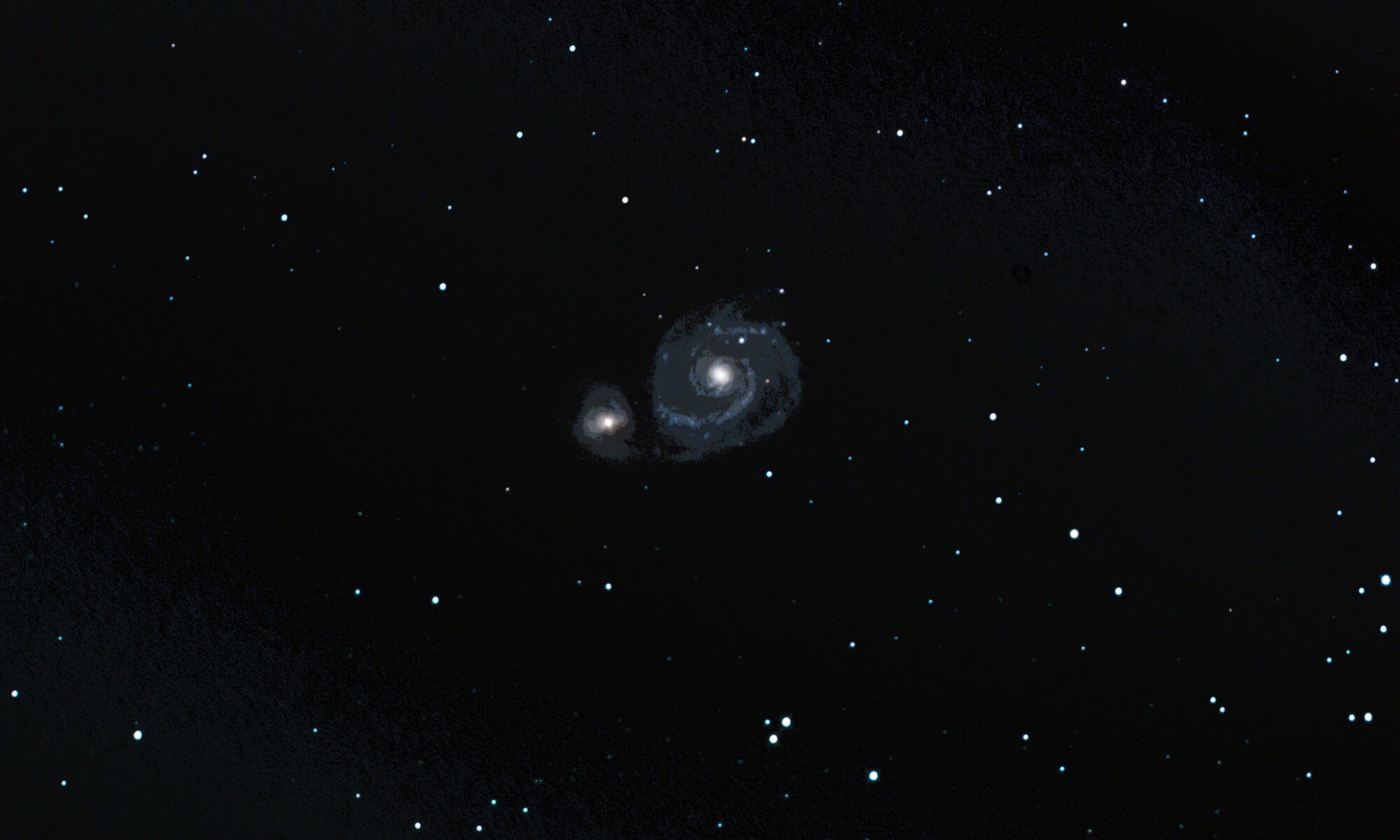 The weather hasn’t been especially great for view or astrophotography this past month, which might be a blessing in disguise. I took what I thought were going to be some great images of the Whirlpool Galaxy, Messier 51. I had 4 hours of good 5-minute exposures in pretty clear skies, but I guess there are just limits to what you can do when you’re pointing your scope over the umbral of city light.

M51 was one of my first DSLR astrophotography targets almost a year ago. I previously discussed my early process and equipment, but I can at least share one of those older images here for context and convenience.

You can see how the light from the city creeps up into the image. The closer to the horizon your scope gets, the worse it becomes. But, the sky didn’t look too bad that night I set out to grab 4 hours of exposure.

I believe my first mistake was I started too early. The sun was set, but there was still some of its ambience in the “night” sky even though I could make out my DSO of choice. It wasn’t until I started to stack and process the image that I began to see the issue. It’s pretty telling.

Even though I dutifully captured my flat and darks, neither seemed quite prepared to overcome the result. Hour to hour during the image capture, that light you see in the bottom of the photo above as a reference, would shift lower and lower. So after stacking and even using GradientXTerminator, you could still see “waves” of light in the background of my data.

After multiple attempts to process the image in Photoshop, I decided to restack the raw files, but exclude at least the first hour of imaging to reduce the light pollution I was getting. Here’s what that looked like after some basic image adjustments. Because the image is cropped and depending on your screen, it can be hard to make out the waves in the background. Just note the bottom left corner is bright, then there’s a band of darker sky, then some brightness just above the galaxies, and then a darker corner. Also, there was not a lot of color.

Undeterred, and not having any new data to stack and process, I tried again. This time around, I applied a color-preserving luminance layer to preserve the star color and more gradually stretched the data with the arcsinh functions and balanced the light levels. Still, I think I oversaturated the image. It may look a little blue, but notice there are some orange stars, too.

While I think this version looks better, if not prettier. It’s still not as clear and as detailed as I would like and I’m still seeing what I can only describe as a “flat” coloration where I would expect to see something that would more resemble nebulosity/clouds.

But really, I probably just need better skies and more Adobe knowledge. Do check out A.V. Astronomy’s video for some good tips and tools for quick image processing in Adobe. I learned about how to create the luminance layer and a method for removing light pollution from his video.