I got the Gigabyte R9 380 4GB graphics card in the mail last Friday. The box was pretty slim and didn’t contain anything other than packing material, a quick install guide, and the card. I kind of thought there would be a disc with some Gigabyte utilities, but nope. I installed the card in the desktop with no problem. See the picture below. The “Windforce” text lights up blue when the fans come on and that’s pretty cool and fits with the blue LED fan in the front of the case. 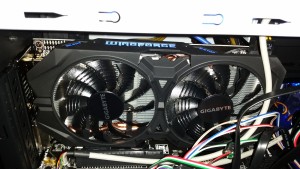 The only tricky part of the install was I didn’t uninstall the old AMD drivers, because I didn’t want to uninstall the A10-7850k’s graphics. I was hoping the Catalyst utility would have detected the new card and prompted an update, or even Windows, but both seem satisfied that the A10-7850k was installed and didn’t care about the new card that was currently running everything. So, I went to AMD’s website and manually selected the drivers and installed them.

For the price, it really is a powerful and relatively low power card. It kept prompting me to run Windows with Virtual Super Resolution turned on, but I passed. I made a few more tweaks, like capping the FPS at 60 with Frame Rate Targeting and adjusting the desktop size to get it to fit on my TV screen properly.

As far as gaming, I tried several different games, but I don’t have a benchmarking tool and the most graphically strenuous game I have is either Alien Isolation or Civilization Beyond Earth. I ran Alien at 1080p with everything I could turn up to max up to max. It looked great, but I think the character model teeth, lips, and tongues could have used some more work. And there is so much dust floating around in the air! Do none of these spaceships or space stations have dust filters on the air intakes?

Civilization Beyond Earth doesn’t look much better than when I run it on my other desktop with an old Radeon 6850, but I also didn’t play more than a few minutes. There was a lot of screen tearing whenever I panned map, too. I suspect I need to play around more with the frame rate targeting, vsync, and my TVs refresh rate.

To sum up, it’s a great card. It’s quiet, seems to run cool, has some nice power saving features, and can max out any game I currently own. If the price on this card creeps down with a holiday sale or the release of a 380x, it’ll totally be worth picking up. There are plenty of benchmarks out there now if you want to see some hard numbers.

As far as the card being bottlenecked by the APU, I haven’t experienced it, yet. And I’m not sure I would know if it did happen. With Windows 10 dropping soon, I suspect if the problem does it exist, it will be mitigated somewhat by DX12.

After installing the card, I felt the need to do a little celebrating. Below is an 18% ABV stout by Mikkeller that I got on sale at my usual pirate-themed haunt. I think it’s just called “Black,” but the site seems to indicate it’s called “Black Fist.”

Whatever it’s actual name, it does hit hard up front and finishes a little bitter and smokey on the back. It’s not an every weekend beer. I’m not sure it’s even a once a year beer. Best just to split a bottle with a friend or three. 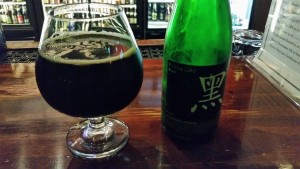 Since discovering Hitachino Nest’s beers, I’ve been working through their offerings as I’m able. I got to try XH and didn’t want to pass up the chance, despite putting down the above mentioned monster. While I love me some sake, this one just didn’t measure up to my expectations. I could catch a hint of the sake–the dryness of it–but not much. Just stick with the Red Rice Ale. 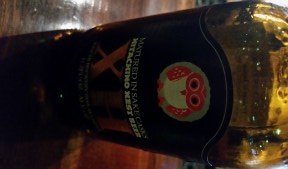 Closing this one with a shout out. Check out Dirty Coast. It’s a locally-owned clothing and art store in New Orleans. They have some pretty neat stuff and also sometimes run events to benefit local charities. Check out their website or visit one of their stores in the Crescent City.

It’s not something I talk about much outside of certain circles, but I really do enjoy building a computer. I put together my last one a few months back. It’s function sits somewhere among HTPC, gaming PC, work PC, and lab rat. I’ll use it to watch a Spoony, a Channel Awesome, or an AVGN episode on my living room TV and then switch over to playing one of the various Steam Games I scooped up on the cheap during the summer sale. Mainly, I’ve been playing (and enjoying) some Defense Grid 2. I’m a sucker for turret defense games. And when the rare mood strikes, I can pop open Word, zoom in to like 150%, and do some writing from my couch.

As far as the lab rat role, let me list the basic specs first.

The more savvy PC building enthusiasts may question some of the components or the lack of them. For example, I’ve yet to add a third-party CPU cooler and there’s no graphics card, as I’m relying on the APU graphics of the Kaveri. Others will questions why I didn’t get a better Intel chip for around the same price. Well, that’s thing. This PC is my lab rat and I really wanted to see just how functional the Kaveri is as a CPU and GPU and what it’s like to manage an SSD and an HD in Windows. This is also the first time I’ve ever used an SSD and it’s been a little bit of a learning experience. I’ve installed only the OS, the MS Office Suit, and Chrome, so far to the SDD, excluding a couple of GOG games I installed to the SSD by accident. I couldn’t find a way to configure the GOG downloader install directory, but I didn’t look very hard. And it’s not as if installing Master of Orion I and II will take years off the life of the SSD, even if playing them has used up a couple years of my own life.

As far as performance goes, everything I do is smooth, including the games I’ve been playing on my 1080p TV. Granted, I’ve yet to seriously play anything more taxing than Diablo 3 and League of Legends, but I haven’t really been up for playing much else lately. So as the Kaveri goes, I’ve no complaints at all, and the temps seem to be well within acceptable levels, based off the AMD Overdrive utility, Gigabyte’s EZTune application, and the BIOS, on just the stock cooler. Noise is not an issue either. If not for the snazzy LED fan lights, I probably wouldn’t know the thing was on.

The Sentey case was the first of its type I’ve ever used before and it really was a pleasure to work with. The case can open from the sides, like your usual tower-type case, but the case can also tilt open like a car hood, letting you work directly above the motherboard, which sits horizontal rather than vertical in the case. I did have an issue with installing the DVD-RW drive, but the Sentey customer service answered my email within hours about how to safely remove the case’s front panel so I could install the drive.

I’m going to wait until Black Friday comes around and see if I can’t get a really good deal on the CM Hyper 212 Evo CPU cooler. I don’t really have an interest in overclocking the Kaveri; I just like to be thorough.

Despite the fact the PC resembles a futuristic-looking bread maker, I really like using it for everyday type stuff and don’t regret building it. If you need to build an inexpensive rig for general computer usage that can handle some light gaming at 1080p, the A10-7850K (or the 7870K now) is the way to go. If you’re planning to go UHD, require high FPS, or want to pick up a $300+ graphics card down the road, then you’ve probably already bought a high-end Intel i5 or i7 so you can play [Insert AAA Title] here at 1440p+ with 60 fps.

But let’s be honest, when it comes to light gaming, “light” is NOT a bad thing. There are some amazing, wonderful games you can play for hours and hours that require minimum specs. Go check out Transistor, the enhanced Baldur’s Gate Games, FTL: Advanced Edition, XCOM, League of Legends, Child of Light, Diablo 3, Starcraft 2, Divinity: Original Sin, Homeworld Remastered, Strike Suit Zero, Skyrim, or just about anything else more than a couple years old.

In the interest of full disclosure, I do own some AMD stock, which I bought just prior to the big console win announcement. I kind of regretting not dumping it when it reached the $4 level, but I have high hopes for the Zen architecture, the coming GPU shrinks, and Windows 10. I should also mention I built a gaming PC for my brother last Christmas with the Kaveri. On the minimal budget I had and by taking advantage of seasonal sales, the Kaveri beat every configuration of components I could come up with as far as power to cost goes. Considering my brother had been playing Blizzard games and League of Legends at minimal settings on his Intel Quad Core Duo, 32-bit Windows Vista-powered Gateway and the crumby Geforce 240 graphics card he dropped in it to play Starcraft 2, the Kaveri was a massive improvement.

I confess, too, to being fascinated by the idea of HSA at the time, but even a year and a half later there hasn’t been any significant implementation of it, which is kind of a bummer.

With all this background out of the way, I can get to the point of this post. I want to boost my lab rat PC, but I’m aware of the limitation of my 600 watt PSU. So, I want to get my hands on AMD’s “tock” line of graphics card, the R9 380, specifically. It features some pretty impressive specs and benchmarks at 1080p for just $200 to $240 depending on the brand and the amount of RAM. I have my eye on Gigabyte’s 4GB offering. I have no special loyalty to Gigabyte by the way. I just haven’t had any issues with their products and I figure a Gigabyte card should get along well with a Gigabyte board.

NVIDIA has some really good cards, too, but nothing with this much power in this price range at the moment. Despite the 3.5GB issue with the 970, that card is a real beast, but it costs about $150 more than I’d like to spend. No, the R9 380 card just screams value to me, as I have no designs on upgrading my monitors or TV anytime soon to UHD. It has one of AMD’s newer graphics architectures, is compatible with DX12 and Windows 10, supports the new frame rate targeting feature to save on power and heat, and it won’t require a PSU upgrade.

I almost ordered the card last week from Amazon when it was in stock for a brief couple of days. I haven’t seen it in stock on Newegg ever so far. My plan is to wait for the fabled Prime Day that Amazon is promoting for July 15. I’m hoping I can get a bit of a discount on the card, but I’ll have to see. If not, I can wait a little longer for a price drop of one sort or another. While I’m itching to see what Alien Isolation will look like with the graphics settings turned up, I really, really want to see how DX12 will handle the R9 380 and the Kaveri’s integrated GPU when Windows 10 and DX12 games come out.