I’m not certain whether I have ever had a truly supernatural experience. The kinds of things I’ve encountered have always walked the line between my imagination and reality. And the thought of actually having a true, make-me-an-absolute-believer-type of experience is both terrifying and wondrous. The implications it would have for my understanding of my own existence, as well as the numerous new mysterious and terrors, would be staggering.

In the spirit of the holiday and with this extra hour of time, I thought I’d share a brief recollection of one of the creepiest places I’ve ever been.

When I was a kid, my parents would clean our church to help pay for my tuition to attend the church’s school. The church was a relatively large building, maybe capable of seating a couple hundred people. It wasn’t a “mega church,” but it was surprisingly nice for what it was. It had a high ceiling and two massive, brass chandeliers. The stage was probably about four feet high with a pit on either side for the piano and the organ. The choir had a place in the back behind the pulpit with risers built into the floor for them beneath the balcony-like baptismal where the centerpiece of the church, a massive, wooden, and back-lit cross hung on the wall.

It would generally take my parents two to three hours to clean the place, which consisted of vacuuming the carpet, dusting, picking up any trash, changing garbage bags, bringing any glasses used by the pastor or deacons to the adjacent office building for washing, etc. My brother and I would help sometimes just to get the job done faster.

So, I spent a lot of time in this church and some of that time was in the dark. When the lights were out, the only illumination came from whatever light trickled in through the front-facing stain-glass windows and the emergency exit signs at either end of the place. Despite being a church and a place I had spent hundreds of hours over the course of the weekly services, in-school chapel services, various school activities, and cleaning, the place was creepy. Maybe it was how the magenta carpet absorbed the red light from the exits signs to make the place darker than it should have been. Or maybe it was the vastness of the space and the numerous shadows. The random sounds of the HVAC system and the building settling didn’t help either. And there were rats in the attic or on the roof, I’m sure.

During some football games, my friends and I, still in grade school, would sometimes sneak away from the game and go inside the school building (I’ll get to the school building in a moment), which stood adjacent to the church and was connected with a compact, car-length breezeway. We would dare each other to go into the darkened church. And one of my friends was a superstitious sort (even more so than the rest of us). She claimed to have seen a demon in the church once. It seemed a frightful thing to us then, much less so as we got older, but now so many years later, I wonder if she did see something or felt something. There was, after all, something very wrong in that church, but it’s not something I want to get into.

And another thing I never wanted to get into was the school building after dark. As it stood next to the church, I would sometimes find myself having to go into the building to get something or to complete some chore. The building was built like a two-story box with an H-shaped hallway on both floors. On the ground floor, each point of the “H” was an exit of double, steel doors that were usually kept chained after hours and had just tinted, vertical slits in them for windows. The line running through the middle of the H was the main hallway with classrooms and the cafeteria on either side. One side of the H was the front of the building with a kind of foyer and the front staircase. The other was a strip of rooms used as the daycare facility. The second floor consisted almost entirely of classrooms, not counting the bathrooms, was connected to the bottom floor with the front staircase and a rear staircase off one point of the H.

Because of the floor layout, the absence of any windows outside of the classrooms, which had shut doors, this building was pretty much pitch black. There were emergency exit signs at some ends of the halls, but not all of them and they were incredible dim. No, if you went into this place at night without a flashlight, especially if the lights were also off in the church, you couldn’t see your own hand in front of your face.

When I had to go into this place, I knew where the light switch was for the hallway lights, but it was several paces down the hallway and place kind of in the middle of the wall. You had to feel around for it in the dark, usually, to find it. Turning on the lights, just one set of them, felt like I was only partially revealing a monster in the dark.

Those hallways were so eerie. Never have I experienced such a sense of claustrophobia in such an open space. The darkness and the air felt thick and heavy. And the couple of times I went alone, I imagined I could feel things moving around me and watching me. Why did that exit sign way at the end of the hall go dark for a second? The place was mostly silent, but silent in the way a cheap horror movie goes silent just before the jump scare comes. There were the usual sounds, sometimes, of the building settling, the water fountain compressors kicking on, and rats. You would listen for these things, glad to hear them because they were identifiable, as your skin tingled and the hairs on your neck stood on end. There was a remarkably strong sense of being exposed and vulnerable. It was as if at any moment, something may strike at your or take you away.

I’ve never experienced anything quite like that since and even back then, I would do my best not to go alone. But even with a few people or a flashlight, the place remained unsettling by managing to be too big, too dark, too empty, and leaving you feeling too exposed. It’s probably a good example of why all those investigators on the various ghost hunting shows always check out a place at night. Some places take on a completely different atmosphere at night than what they have during the day.

Do I think there was something lurking in those black hallways? I can’t say. It would be easy to dismiss it as just being a kid, but I don’t think I would want to go through those hallways at night, alone, as an adult. I’m no stranger to being in the dark or in creepy places. I’ve visited the Myrtles a few times and find the place generally pleasant once I get past the feeling of heaviness that comes over me every time I enter the parking lot.

Real or imagined, part of me thinks there’s something there. And it’s something I do not want to trifle with.

So, the thing that brought all of this to the forefront of my thoughts was my viewing of The Babadook for the first time. Don’t worry, I’m not going to share any spoilers or get into the plot or its meaning. No, it was the design and appearance of the Babadook that stood out to me. When I imagined something in the dark waiting to take me, I imagined something like the Babadook. That may be due to the bogey man nature of the creature. We all seem to have a general fear of shadow demons hiding in the dark. But yeah, I would not want to wake in the middle of the night to find half my room in supernatural shadow and such a creature looming over me, metaphor or not.

As far as horror movies go, it’s a good flick and original, which is refreshing. It’s definitely worth checking out with a friend, but don’t expect any major scares. This is more a psychological film. It made me feel more uncomfortable than afraid. It’s also more cerebral than your average slasher flick, so be prepared to pay attention to it. It’s more carefully crafted that you might realize upon your first viewing.

The sleeve that came with the blu-ray disc had a pretty cool pop-up design, imitating the children’s book that warns of the Babadook. It’s actually so cool, I’ll probably never be rid of it.

Not everything you find in dark places is necessarily bad. During the last super moon eclipse, I found myself walking all the way out to the nearby park, hoping it would be dark enough to capture some good photos of the eclipse. As I made my way into the park, which you aren’t really supposed to do after sunset (I’m a rebel…), I saw dancing, colored lights in the distance. And as I continued, I eventually heard music. I almost turned back, not wanting to get involved with strangers in the dark, but stayed the course. I ended up meeting the members of the Baton Rouge Fire Guild. From what I can tell, they’re just a group of people that like to dance with lighted things and fire. Simple enough. I couldn’t actually see their faces, because it was so dark with the clouds and the eclipse but I used the slow exposure setting for fireworks on my camera to snap some cool photos of them while I waited for breaks in the cloud cover to take quick shots of the eclipse. Here’s some shots. 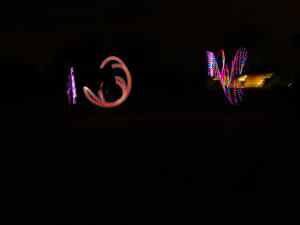 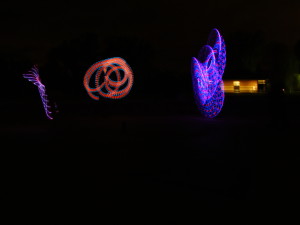 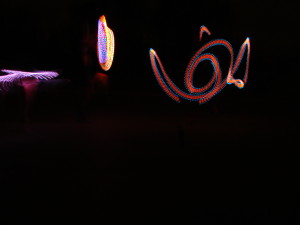 I didn’t actually get any good shots of the moon until I headed back and the cloud cover broke. I found myself in the dark, bracing my camera on a disc golf basket to steady it, while I used various settings on my camera to get it to both focus on the eclipse without blurring too much and capturing the color. It was a challenge. I kind of need to get a new camera. But, here you go. 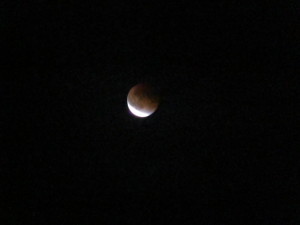